You Need a New Story

Laurel Book Store has come to an end. What do you want to read? Or hear? We know booksellers who can recommend something for everyone. Or anyone! During these tough times, it's crucial that we have writers who can take us out of where we are now and transport us to new places. Even if it's just for a few hours. And it's crucial to support our community book stores. I have a few in mind that you would do well to patronize. Often.

You Need Books- Here are some to know about!

In this brilliant book, Isabel Wilkerson gives us a masterful portrait of an unseen phenomenon in America as she explores, through an immersive, deeply researched narrative and stories about real people, how America today and throughout its history has been shaped by a hidden caste system, a rigid hierarchy of human rankings. Beyond race, class, or other factors, there is a powerful caste system that influences people's lives and behavior and the nation's fate. Linking the caste systems of America, India, and Nazi Germany, Wilkerson explores eight pillars that underlie caste systems across civilizations, including divine will, bloodlines, stigma, and more. Using riveting stories about people--including Martin Luther King, Jr., baseball's Satchel Paige, a single father and his toddler son, Wilkerson herself, and many others--she shows the ways that the insidious undertow of caste is experienced every day. She documents how the Nazis studied the racial systems in America to plan their out-cast of the Jews; she discusses why the cruel logic of caste requires that there be a bottom rung for those in the middle to measure themselves against; she writes about the surprising health costs of caste, in depression and life expectancy, and the effects of this hierarchy on our culture and politics. Finally, she points forward to ways America can move beyond the artificial and destructive separations of human divisions, toward hope in our common humanity.

In this "vital, necessary, and beautiful book" (Michael Eric Dyson), antiracist educator Robin DiAngelo deftly illuminates the phenomenon of white fragility and "allows us to understand racism as a practice not restricted to 'bad people' (Claudia Rankine). Referring to the defensive moves that white people make when challenged racially, white fragility is characterized by emotions such as anger, fear, and guilt, and by behaviors including argumentation and silence. These behaviors, in turn, function to reinstate white racial equilibrium and prevent any meaningful cross-racial dialogue. In this in-depth exploration, DiAngelo examines how white fragility develops, how it protects racial inequality, and what we can do to engage more constructively. 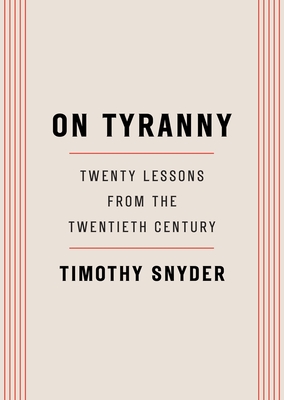 The Founding Fathers tried to protect us from the threat they knew, the tyranny that overcame ancient democracy. Today, our political order faces new threats, not unlike the totalitarianism of the twentieth century. We are no wiser than the Europeans who saw democracy yield to fascism, Nazism, or communism. Our one advantage is that we might learn from their experience.

On Tyranny is a call to arms and a guide to resistance, with invaluable ideas for how we can preserve our freedoms in the uncertain years to come.

Remember baseball? Our family is into it and sad to have the season pretty much not happen for 2020. But do I have a treat for you! My awesome brother in law has penned a book of haiku from his unique position in the game of baseball. He's the radio announcer for the Sacramento River Cats, the Triple A minor league team now affiliated with the San Francisco Giants. Johnny Doskow has covered a lot of sports, but been with the Rivercats now for nearly 20 years. You might remember him from 2012 when he filled in for 34 games for the Oakland A's. His book is a delight for baseball fans who will get the humor, the call up to the big leagues, and the everyday moments of an insider in the game- all in 17 syllables each. Here's the link for how to get the book, Johnny is selling it himself so when you order, you can get it autographed too! This is perfect for the baseball fan who is mourning the season right now. Treat yourself too!  (I don't profit from the sales of the book. I just love the guy and really love the poems.)

This feature require that you enable JavaScript in your browser.
END_OF_DOCUMENT_TOKEN_TO_BE_REPLACED

This feature require that you enable JavaScript in your browser.
END_OF_DOCUMENT_TOKEN_TO_BE_REPLACED

This feature require that you enable JavaScript in your browser.
END_OF_DOCUMENT_TOKEN_TO_BE_REPLACED

This feature require that you enable JavaScript in your browser.
END_OF_DOCUMENT_TOKEN_TO_BE_REPLACED